into the woods she steps...
padding lightly on a familiar path
taken almost 2x daily now ~ 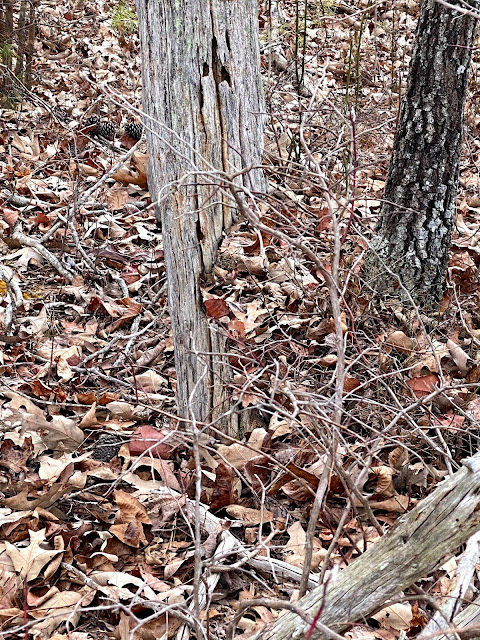 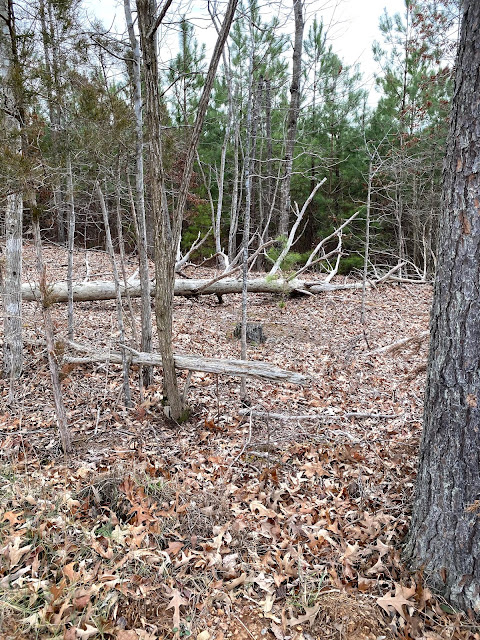 along her journey ~ waist-high bushes hold nests in their gnarled hands,
cupping them ever-so gently as the dried branches blanch in the winter sun ~ 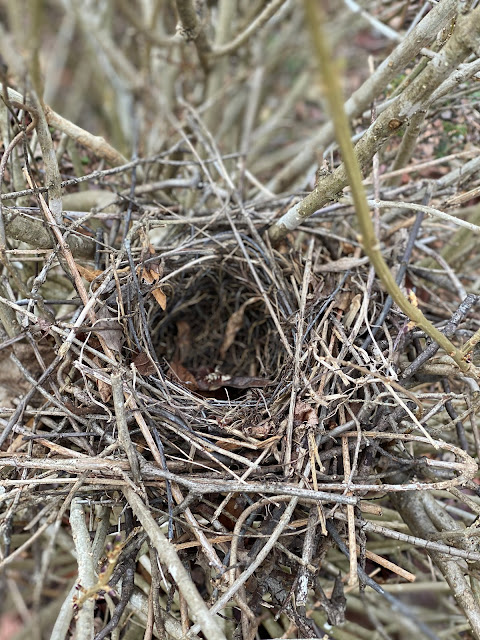 not one, but two vessels
~ purposely woven from twigs and sticks
with the intent of caressing newborn life. 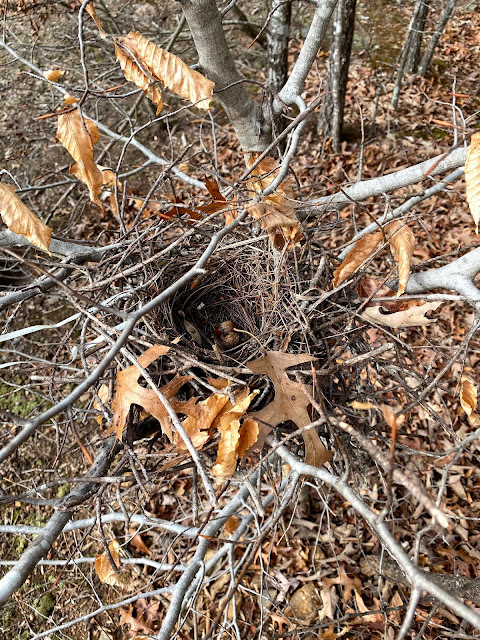 she leans in for a closer look and finds
a cache of late-autumn acorns
half-eaten
long forgotten now
except to the small worms who now live inside
the shiny brown shells. 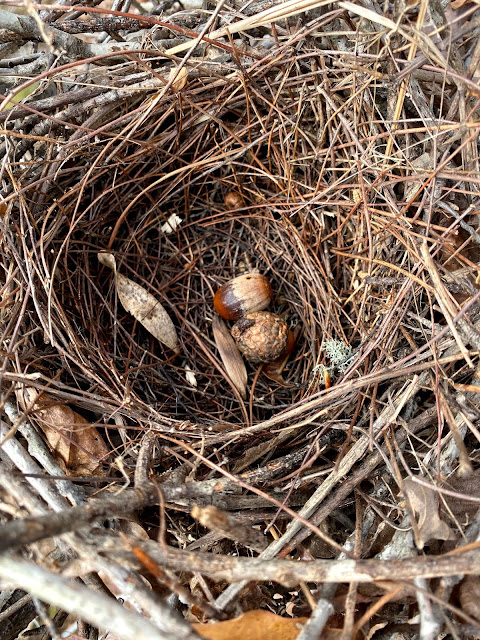 she feels full ~ as though the woods are nourishment.
and they are...
her walks feed her soul.

how the air smells different here with scents of pine and black earth.
how the breeze caresses her cheeks and makes her hair float ~
and the muffled sound her shoes make upon a path of velvet moss. 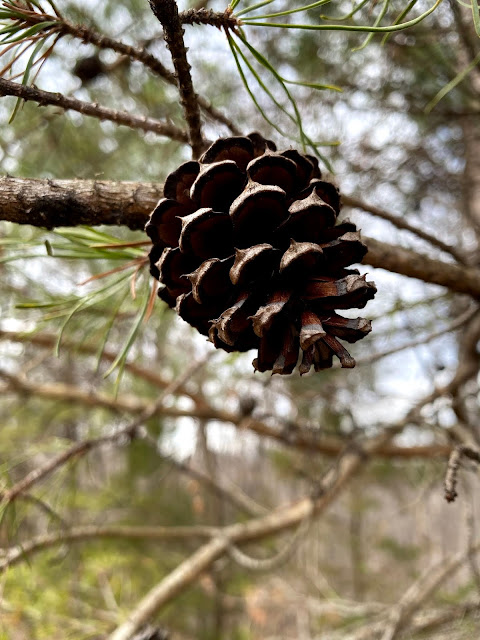 as she emerges again from her woods,
touches of verdant shoots are here and there  ~
as the witch approaches her humble farmhouse. 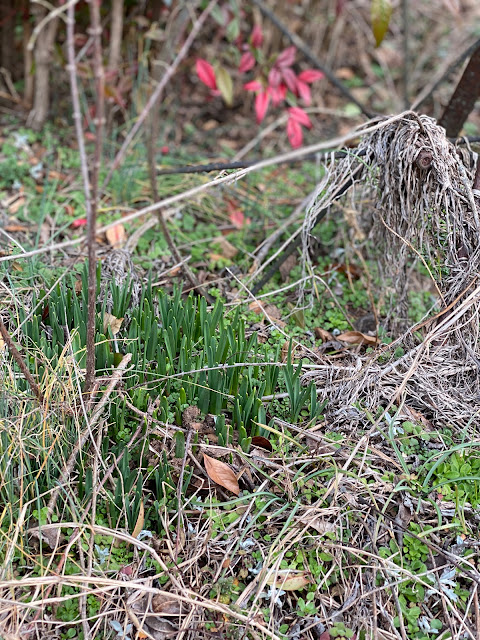 those closer to the old farmhouse sprout before their woodland neighbors,
being warmed by the bouncing sunrays ~ 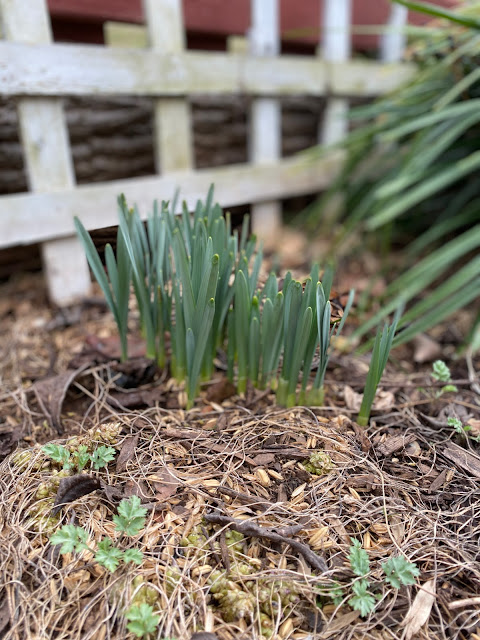 there are signs of human-life now,
long ago implements rust along the sides of the big fields where the deer
watch her from the woodline edges.

iron that once came from earth
now ~ sinks back to earth. 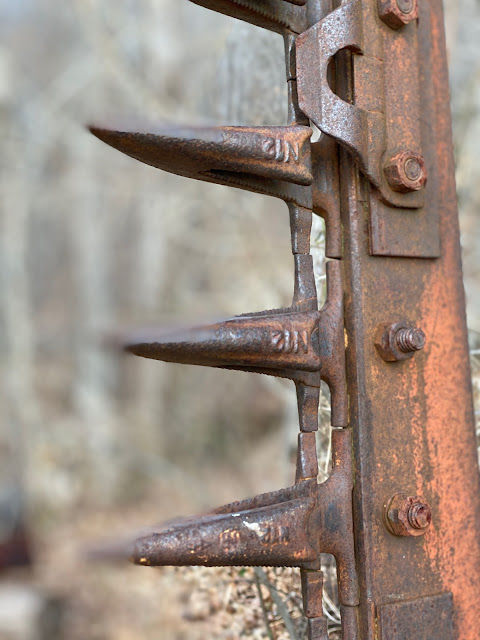 porch swings and mewing kittens.
whiskers and gentle head bumps from beloved familiars.
her company on these small journeys she takes daily. 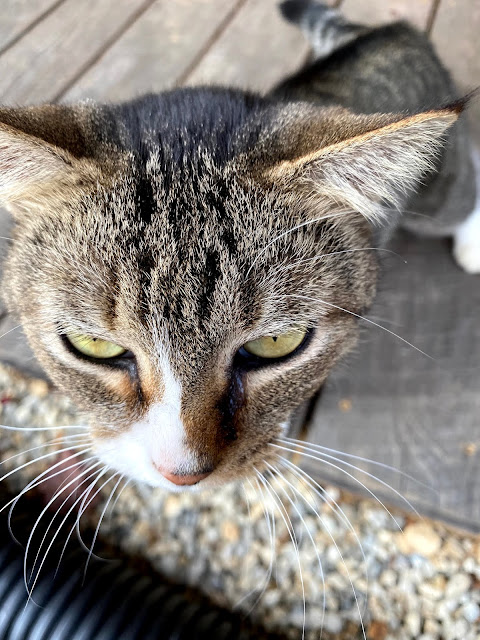 tangled branches of her walking stick bush greet her as she enters her garden...
sharing whispered secrets between it's braided arms: 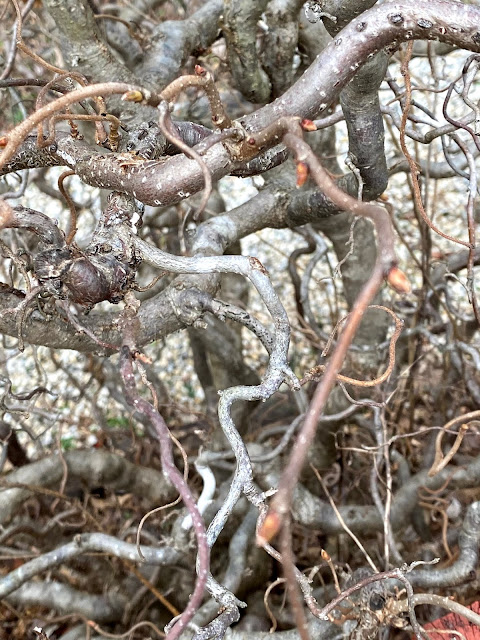 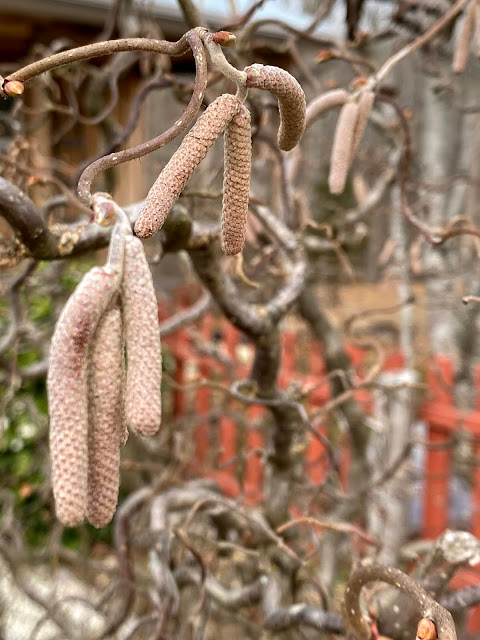 her walk is over ~
a cup of tea and a snuggle
a biscuit and a sweep of her kitchen floor
before finding her needle and thread. 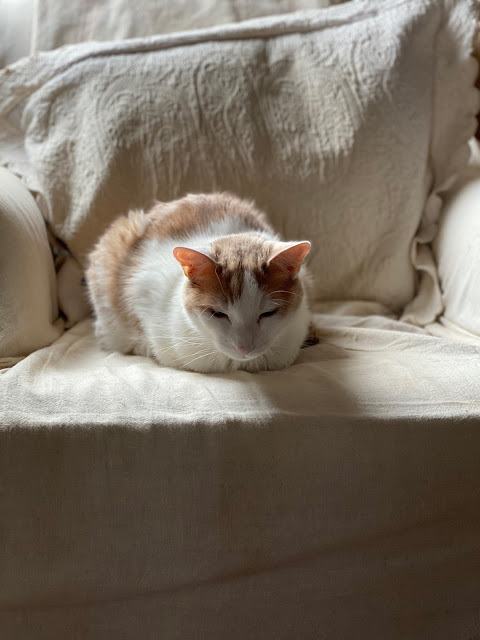 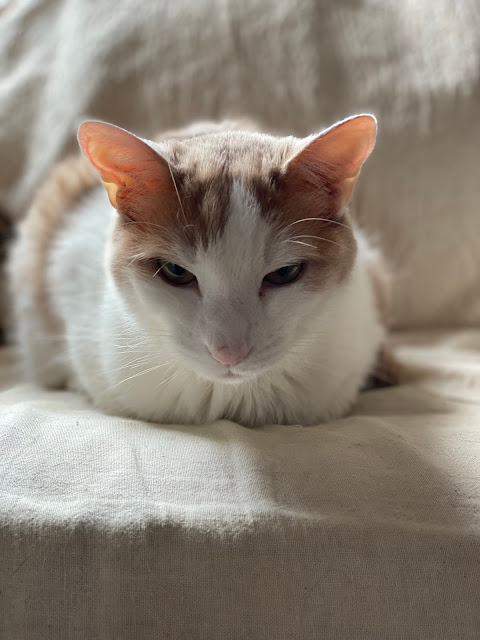 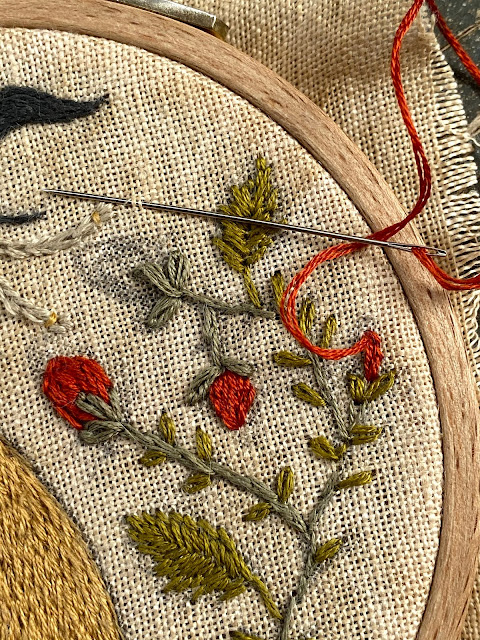 remembering her walks
by painting them with fibers of cotton and silks. 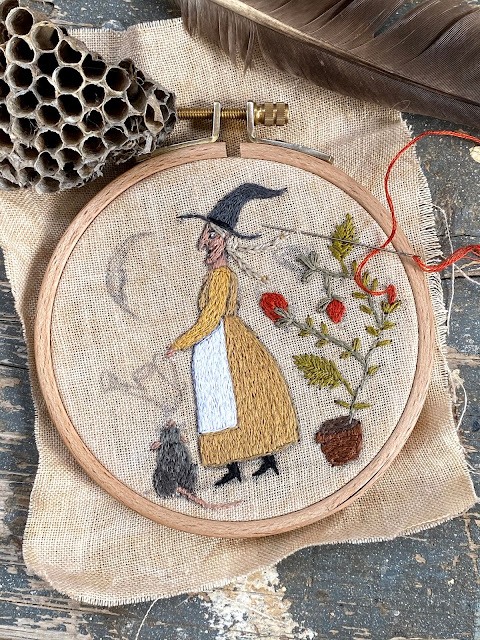 Your Affiliate Profit Machine is waiting -

The solution is right here 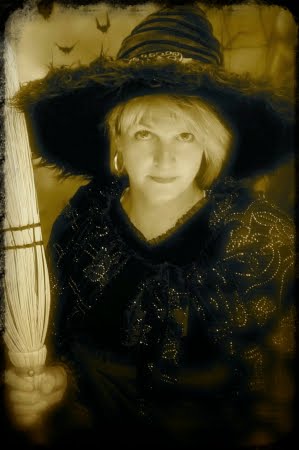 I live in an olde farmhouse in the Blue Ridge Mountains of Virginia, on an 84 acre farm named Notforgotten Farm... I play in the dirt ~ I collect old and odd things ~ I throw my head back and cackle when I laugh...I celebrate Olde Hallow's Eve everyday...I raise orphaned Opossums and other little creatures that may need a helping hand...I am a Good Witch...I love my family & friends ~ I see the past through the eye of a needle... 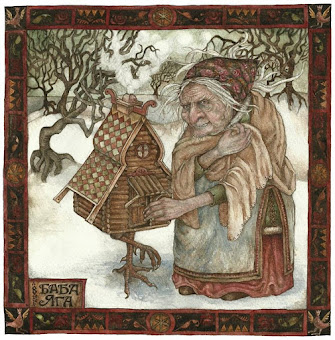 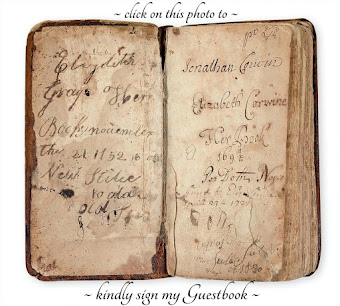 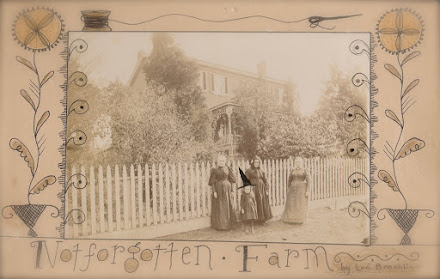 Why You Might Be a Witch
by Theodora Goss

Because sometimes you dream of flying
the way you used to.

Because the traffic light always changes for you.

Because when you throw the crusts of your sandwich
to sparrows in the public park, they hop close
and closer, until they perch on your finger
and look at you sideways.

Because as you walk down the street,
the wind plays with the hem of your skirt
so it swings dramatically around your ankles.

Because as you walk, determined and sensible,
your shadow is dancing.

Because a lot of people talk to cats
but for you they answer.

Because the sweetgum trees along the sidewalk
love to show you their leaves, sometimes even tossing
them in front of you, yellow veined red,
brown shot with green and yellow,
like children showing off artwork.

Because when you look up,
the moon is always smiling.

Because sometimes darkness closes around you
and you remind yourself that it’s all right,
you’ve worn this cloak before.

Because in winter you acknowledge
that snow is a blanket as well as a shroud,
and we must all sleep sometimes.

Because in spring you can hear the tinkling bell-sounds
that crocuses make, and the deeper gongs of the tulips.

Because the river waves to you in passing,
and you wave back.

Because even the brownstones of this ancient city
look at you with concern: they want to make sure you’re well.
You belong to them as much as they to you.

Because witches know what they are
and if I asked, do you remember?
You would have to confess that yes,
...you do.

The Witch ~ by Theodora Goss

Sometimes in the morning, the mist curled into the corners
Of the house like a cat, and Grimalkin, she would cry,
come to me, my Grimalkin. She would gather
the mist to her, and stroke it, and it would settle
in her lap, and lick itself.

Sometimes, she wove
cobwebs and out of the cloth, thin, gray, luminescent,
she would cut the pattern for a dress. But for what purpose?
Where could she wear it? Where could she go, except
to the pond, where she would kneel and dip her fingers
into the water, and stir, and out would jump
a trout, thick, silver, luminescent, and splashing
water onto her dress, whose hem was already
soaked and covered with mud.

She would make it speak,
recite Shakespearean sonnets, sing old songs,
before she put it into the pot. Witches
are lonely, but also hungry, and practical
in their impracticality. She had learned
how from her mother, the old witch, now dead
if witches are ever entirely dead, which is doubtful.

She never wondered who her father had been,
a peasant gathering wood, perhaps a hunter,
perhaps even a prince, on his way to the country
where a princess had been promised for dispatching
a dragon or something similar, and had seen
a light through the trees, and found her mother waiting,
and perhaps gone on the next morning, and perhaps not.

Her mother had built the house by the edge of the pond,
out of gray stone and branches of white birch,
birds’ nests and moss, and spit to hold it together.
That is how witches build what they call houses.
What they are not: sturdy, comfortable.
What they are: cold.

There was still a row of bottles
in the cupboard, holding martens’ eyes, dried frogs,
robins' eggs, random feathers, balls of string,
oak galls. She had forgotten what they were for.
From the rafters hung a fox's skeleton.

Once, village girls had come to visit her mother
for charms to attract the schoolmaster's attention,
make their rivals' hair fall out, abortions.

Afterward, they would say, Did you see her? Standing
by the door? In her ragged dress, with her tangled hair,
I tell you, she creeps me out. But they stopped coming
after the old witch disappeared and her daughter
was left alone. Sometimes she would remember
the smell of the bread in their pockets, the clink of coins,
their dresses covered with embroidery,
their whispering, and look at her reflection
in the pond, floating on the water like a ghost.

Sometimes she made the frogs at the edge of the pond,
calling to one another, speak to her.
"Pretty one," they would say, "in your spider silk,
in your birchbark shoes, like a princess lost in the woods,
kiss us." But she knew that was not her story.

Sometimes she would make the birds perch on her fingers
and sing to her: warblers, thrushes, chickadees,
and sing to them out of tune, then break their necks
and roast them.

Sometimes she would gather the stones
that had fallen from her house, and think of making
a dog, a stone dog. Then, she would forget.
It was the forgetting that made her what she was,
her mother's daughter. Witches never remember
important things: that fire burns, and that bottles
labeled poison are not to be drunk. Witches
are always doing what they should not, dancing
at midnight with the Gentleman, kicking their skirts
over the tops of their stockings, kissing frogs
they know perfectly well won't turn into princes.

She makes no magic. Although the stories won't tell you,
witches are magic. They do not need the props
of a magician, the costumes or the cards,
the scarves, the rabbits. They came down from the moon
originally, and it still calls to them,
so they go out at night, when the moon is shining,
and make no magic, but magic happens around them.

Sometimes at night she would look up at the moon
and call Mother? Mother? but never got an answer.


I want you to imagine: her ragged dress,
her hair like cobwebs, her luminescent eyes,
mad as all witches are, stirring the pond
like a cauldron (witches need no cauldrons, whatever
the stories tell you) while above her the clouds
are roiling and a storm is about to gather.

Now, Little Dear, tell me,...how is it that you've found yourself at Midnight Farm? are you lost? can I help?

There, there...don't be frightened...I'll keep you safe from harm's way...

She thought to herself how very peaceful it would be to rest a spell in it's branches, so she climbed as high as she could...so high, that she became tired and couldn't climb back down,...

There the litte thing sat, tethered to a strong branch, but scared silly...she began to cry, and a nearby Crow heard her...

...He thought she sounded beautiful,
(although he didn't know she was sad.)

He flew over to her, and asked if she was alright...she replied that she wanted to go HOME...he offered to take her to wherever her nest was, so she climbed onto his strong, sleek back....

Off they flew into the night, and as you might guess, they also became lost...They came upon a Wise Old Owl and asked him if he knew where HOME was...the Owl thought for a moment, looked around them and replied..."right Here, of course..."
...The little girl wasn't afraid anymore, and the Owl and the Crow took very good care of her ...

~ On quiet Autumn eves, when the Owls and the Crows gather deep in the woods at dusk to practice their cacophony of screaches, chortles and hoots...listen carefully for the sound of a little girl giggling quietly as she gathers Mushrooms....